This is the dramatic tale of the Nepaul shipwreck that occurred  east of Gerickes Point on 11 February 1850, over 170 years ago.

The Nepaul was a Full-rigged East Indiaman, a 546 ton cargo ship built by John Scott and Sons, a successful ship-building business that stayed within John Scott’s family for nearly 300 years from 1711 until 1984. It was reputed to be the first UK ship-building organization and was based at the Westburn shipyards of Greenock, Scotland. During that period the family owned company built over 1250 ships. The Nepaul was launched on 28 January 1842. It had been commissioned by a businessman, John J. Campbell of Glasgow.

In February 1850 the Nepaul was on a return journey to London, from China and Bombay. On board were Captain A. McClean and his 19 crew, 5 passengers, Dr. and Mrs. Bell, Mrs. Drago and her 2 daughters aged 9 and 11 and the cargo hold was full of cotton bales and furniture. 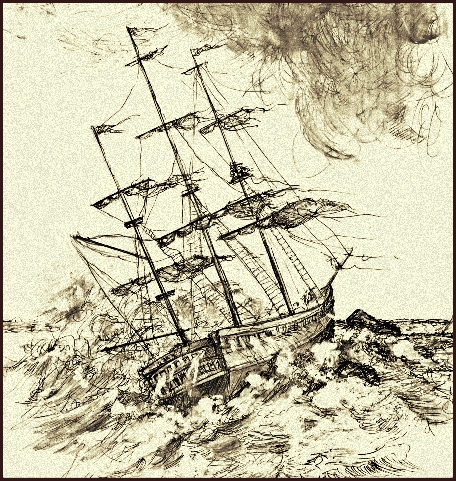 The Nepaul caught on a rock and listing in stormy seas

Some weeks into the voyage while sailing close to the southern coast of Africa the ship was becalmed off Gerickes Point at the mouth of the Swartvlei for 2 days. To relieve the monotony of the long journey it was decided to celebrate the captain’s birthday with a picnic on the inviting white beach in sight of the interesting rock hewn sphinx-like creature  that overlooked the bay.

After a pleasant relaxing time on terra firma the tempo changed swiftly shortly after the happy party arrived back on board the ship. A storm of nightmare proportions arose driven by a violent south-westerly wind and before the vessel could head out to sea, she was driven onto a submerged rock.

For 3 days and nights the waves pounded the trapped ship unmercifully while the crew huddled together for warmth, crouching aft as best they could, to shelter from the wrath of the angry waves. For their safety, the female passengers were carried up the tall masts and lashed to the cross trees. Periodically the crew climbed the rigging to give the luckless exposed captives onions and raw pumpkin which was all they could offer them as the galley was under water and most of their provisions had washed overboard.. 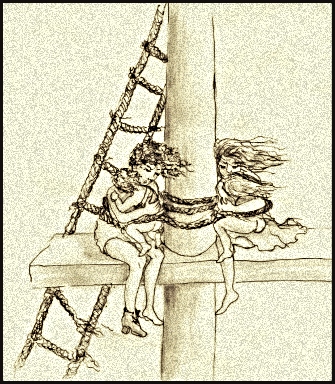 Local residents (this was before the time of Sedgefield when the Meedings owned the area and it was called Ruigtevlei) watched helplessly as the ship’s lifeboats were smashed to pieces and washed ashore in splinters.

Attempting to reach shore, Chief Officer, Mr William Henderson tied himself to the ship’s hencoop and took to the sea but became the first casualty when he drowned in the turbulent water.

On the 4th day the wind died down and the sea calmed slightly. High tide was in progress but the wind was blowing towards the land so hastily, two rafts were constructed on board.

Next, some rope was attached to a piece of wreckage that floated towards shore. Watching from the beach, as Charles Curry swam out through the rough surf, eager hands waded out to grab it and were able to help him bring it to the shore and secure it.

All on board the Nepaul then took to the rafts. There followed an anxious hour of suspense as the frail rafts were hauled through the foaming surf one at a time. The two little girls, by now unconscious and without a stitch of clothing, were tied to the backs of sailors until the adults had clambered onto the raft. Then the crew had to hold on tight to the rope helping bring the fragile craft to shore. 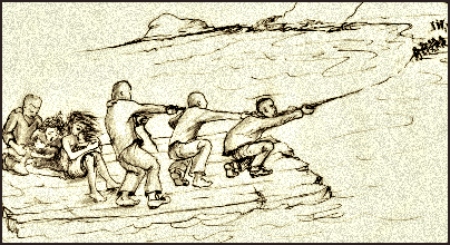 The two women, in the same condition, naked, having had their clothing torn from them by the fierce gale, were lacerated with their skin peeling from the long exposure. Captain McClean was last to leave the stricken ship.

Unfortunately two of his crew Dugald Blair, the sail maker and John Davie, the ship’s boy, were washed off their rafts into the tumultuous waters and drowned that fateful day. Those that made it to land "fell to their knees and rendered thanks to Heaven for their merciful deliverance."

Meanwhile, Mr and Mrs Meeding from Ruigtevlei had arrived on the scene to see if they could help in some way. Together with their daughters, Anna 26 and Catherina 24, they immediately wrapped the women in blankets and made speedy arrangements to bring the passengers and crew to their farm where they could be taken care of and allowed to recuperate until they had means to get to Cape Town.

On 23 February most of the crew were able to board the 116 ton schooner, Curlew at Knysna and sail on to Cape Town. The Captain and 6 remaining crew members joined the 60 Ton schooner, Louisa at Mossel Bay a short while afterwards. One crew member, only recorded as Tom, decided to remain with the Meedings and continued to live and work for them until he died 30 years later.

The Salvaged Remains of the Nepaul Shipwreck

Meanwhile, the beach, near the scene of the Nepaul shipwreck was strewn with random items of cargo and sections of the broken-up vessel. Some of it was seized and carried away by opportunists but a guard was speedily appointed by the Acting Civil Commissioner in George to watch over the remaining items. On March 1 the beached remnants of the Nepaul were sold  on the spot by Agents Borrodailes, Thompson, Pillans and Co. with Mr Ruschick, serving as the auctioneer. Bales of cotton and an assortment of Indian goods went under the hammer. The wreck itself was bought by Mssrs. W. Hooper and George W. Dutton for £900. 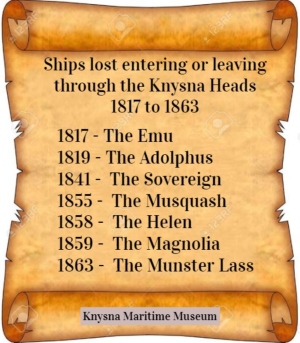 Some years later, the pilot, John Benn had the Nepaul's rudder and portholes incorporated into the construction of the Annie Benn, a 50 ton schooner, that was completed in 1867. (It was John Benn’s second ship and only the third ship to be built in Knysna.) Almost 500 people attended the launch but only 3 years later, she was wrecked at Mossel Bay.

However, the Knysna Heads was by far the most treacherous access point for sea faring vessels along this stretch of coastline. Between 1817 and 1863, 7 ships floundered and were lost either trying to enter or leave the Knysna Estuary through the infamous Heads! 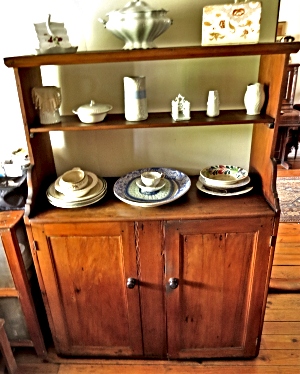 Sideboard from the Nepaul shipwreck handed down from the Meedings to Eppie Hooper.

Certain items of furniture belonging to descendants of the Meedings such as a carved rosewood table and chairs, a chest of drawers and a sideboard were reputed to be relics from the Nepaul shipwreck. The stinkwood and yellowwood cabinet was repolished by Mr. H. Boschof, chief cabinet maker to Messrs. P.J. Van Reenen of Rheenendal in the mid 1970s.

It was eventually inherited by Eppie Hooper, who was related to the Meedings by marriage. At one point it was stolen and some years later recovered from a worker's cottage. It now resides in the Millwood Museum in Knysna.

In the middle 1950’s (approximately 100 years after the Nepaul shipwreck), a casket was found early one morning after a stormy night, partially exposed on the Swartvlei beach. Examination of the contents found it to be strong spirits.

With the help of his gardener, the man retrieved it from the beach and took the find to a Knysna Bottle Store where the owner said it was “a very fine brandy, probably one of the best he had ever tasted!”

The discoverer who wished to remain anonymous, said he exchanged it for a year of soft-drinks as he was not a drinker of spirits. He reckons from the age of the keg, that it could only have been from the Nepaul shipwreck. 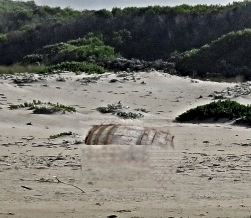 Brandy Keg from the Nepaul Shipwreck in 1850.

A long time resident, Gwyneth Pienaar, was given 2 pieces of pottery by an elderly resident some years ago who found them embedded on the beach one morning many years before that. She was getting rid of many of her things and giving items away to people she thought might like them. She suggested that the pieces could have come from the Nepaul shipwreck.

(The Chinese were among the first people in the 14th century to make blue and white pottery.They got the cobalt blue dye from Persia - modern day Iraq - which had a direct sea trade route to India and China. The Nepaul had been en route from India and China.) 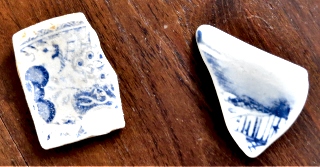 Pieces of old blue & white pottery found on the beach near the river mouth.

The Nepaul shipwreck’s anchor remained visible at the river mouth for many years until Walter Muller brought it to the roadside near the front of his shop called "The Anchor Cafe". What happened to it is not known. Gerry Stavros says it was not the anchor later positioned at Stop 'n Stay as has been commonly thought. He subsequently donated it to the Knysna Sea Scouts when the North service road was widened.

The Nepaul shipwreck was but one of many that has occurred along the treacherous South African coastline which has gained a formidable reputation as the "Cape of Storms" because of the strong currents and rough seas that pummel it's rocky shoreline and frequently catch unwary captains by surprise.  Fortunately for the passengers and crew of the Nepaul in 1850, of 24 people on board only three lost their lives, the rest made it safely home.

"Knysna the forgotten Port – The Maritime Story" – Margaret Parkes and V.M. Williams
Grateful thanks to Sheila Cooper-Colins for her careful drawings illustrating the Nepaul, the female passengers tied to the mast and the one raft being pulled ashore.
Thanks to Gwyneth Pienaar for allowing me to photograph her pieces of pottery.
"The Wreck of the Nepaul" article by Malcohm Fraser (undated)
Letter written by Robert Francis (Bob) Morris to Enslé Syphus 12 October 1984 telling her about the sideboard that his sister, Eppie Hooper had inherited from the Meedings re the Nepaul shipwreck. 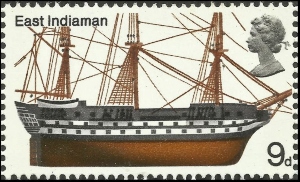 East Indiaman was a general name for any sailing ship operating under charter or license to any of the East India Companies of the major European trading powers of the 17th through the 19th centuries.
The term is therefore used to refer to vessels belonging to the Danish, Dutch, English, French, Portuguese, or Swedish East India companies. They had a monopoly on trade with India and China.
They carried both passengers and goods but were built to carry as much cargo as possible. When the company lost its monopoly, the ships of this design, that had survived the rigors of ocean life,  were sold off.
https://stampaday.wordpress.com/2018/03/27/east-indiaman/
by Mark Joseph Jochim 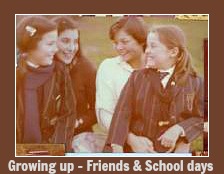 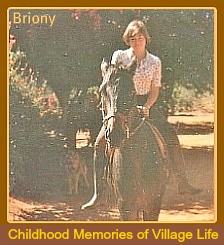 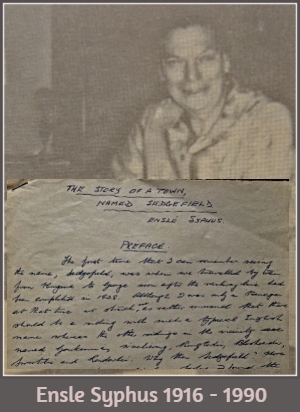